my facebook newsfeed is full of twits with links to images hosted on twitpic and yfrog. both twitpic and yfrog provide a super simple way to get thumbnails from these links. so, until facebook or some facebook-app does this for me, i had to do it for myself.

here’s a simple bookmarklet twitpicfix that will convert this:

since i’m too lazy to write a firefox extension (and there’s already a PowerTwitter that does some of this for the twitter website itself), so I hacked a bookmarklet that does it.

drag the bookmarklet twitpicfix to your links bar and click it whenever you have a bunch of twitpic/yfrog urls and want to preview them inline.

in fact, here’s a http://twitpic.com/892ti link, click the twitpicfix link and see what happens.

just got my new Kindle 2 which is totally awesome.
I found this website, http://manybooks.net/ which has tons of books from Project Gutenberg, it also has all the titles in the Kindle’s AZW format.

My friend Amit Shafrir said it would be cool if there were some script that let you quickly download these AZW files, and so here it is.

It’s a bookmarklet, drag it -> ManyBooksKindlify <- to your bookmarks toolbar and whenever you are on a page that lists books on http://manybooks.net/ click it to automagically have direct-kindle-download links inserted into the page (a little ‘k’ icon).

You can start by visiting the weekly most downloaded books list.

So I was sitting this Sunday afternoon, getting pissed that there’s no easy way to monitor replies on Twitter. I talk with people there and there’s no serious built-in feature in Twitter that will notify me when people reply to me, which, other than direct messages, is exactly when I want to jump back in and continue the conversation.

I ended up taking the RSS for my updates – http://twitter.com/statuses/replies.rss (requires your credentials), pulling it through Yahoo Pipes (because its able to supply my credentials to Twitter), and using the result of that pipe with Pingie (a useful free service that does RSS to SMS). Why not Yahoo Alerts? It just didn’t work…

A few tests later and I get an SMS whenever someone replies to me on Twitter.

Now, who can stop there? just what I thought.

I have this stock which is suppose to fluctuate coming Monday/Tuesday, I’d like to have something automatic notify me when that fluctuation takes place. An hour later I’m done with my first “serious” Pipe – the Stock Alert: 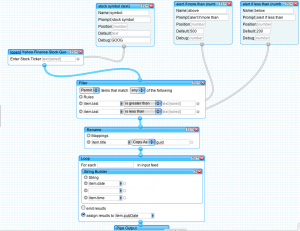 It was fun to write because it forced me to learn the whole Pipes thing, and I’m happy to add that to my arsenal of ‘quick and dirty’ utilities, maybe even not that dirty. The idea is to generate a new RSS item any time the alert pops, so right now it achieves that by reiwiring the date and time into both the item’s guid and its pubDate.

I have another pipe that does a Union bewtween my Twitter replies, the stock alert and whatever I come up with next. This endgame Pipe is what gets SMS’d whenever it changes.

My concusion: Pipes is very cool and more than cool its very powerful and useful. Works great as a Sunday afternoon game. 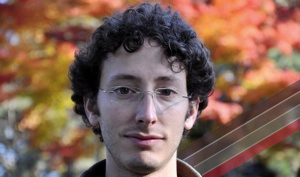 I'm Ohad Eder-Pressman, a San-Francisco based Founder & Software-Hacker. Currently I am the CEO of 3D3R Software Studio.

This is where I post my ideas, hacks and stuff.